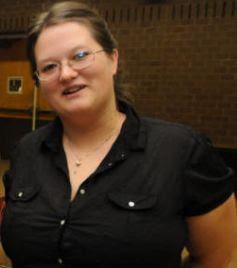 At 9:16 last night Sarah Lake of the Daily Times, (since she's still on their employee list) called me with multiple obscenities, all witnessed by at least 20 people.

The call came in and we were joking as soon as the phone rang, well, its either the Mayor or the Daily Times. I flipped open the lid as I didn't recognize the number and a woman who identified herself as Sarah Lake called me a piece of shit and to go F%ck myself.

Funny, this morning I put up a comment that came in stating they hoped those employees that lose their jobs sue me. ME? Why don't these jackasses stop harassing me. Why doesn't the Daily Times get control of their employees.

I told Mrs. Lake I had nothing to say to her and don't you ever call me again, I hung up. Everyone sitting there listening to this call simply couldn't believe what they were hearing.

At that point I made an immediate call to Chief Barbara Duncan who did not answer the call, nor have I heard from her as of 9:30 AM. These people are sick in the head. They caused the alleged problem and they want to call me and harass me, acting as if I had done something wrong. Unbelievable!
at 6/24/2012 05:00:00 PM

Anonymous said...
Lets hope Duncan does something to stop all this. Lake is unstable and needs serious help.
June 24, 2012 9:48 AM

Anonymous said...
Maybe if these people spent as much time doing investigative reporting as they do engaging in this kind of behavior the DT would actually have some news in it. All I ever see in the DT is reprinted court documents. It seems they are afraid of getting sued if they print any real news. They are also too political and too close to elected officials to really be trusted. In reality I suppose they are like the typical journalist, very liberal and only want to print the information that they agree with.
June 24, 2012 9:52 AM

Anonymous said...
Thanks for posting her picture, so that evasive steps can be taken if reasonable people want to avoid her. I sure would, but I doubt we frequent the same places.
June 24, 2012 9:55 AM

Anonymous said...
I had high hopes when Chief Duncan was hired. I hope she doesn't continue listening to Jimbo. She needs to look at all sides of this story.
June 24, 2012 10:01 AM

JoeAlbero said...
To those of you claiming I was spoofed again, WRONG. I couldn't get to the phone in time so I had to call the incoming number back to see who it was or what it was about. That is when Sarah answered the phone and I said, who is this. She said she was Sarah Lake, blah, blah, blah. Nice try.
June 24, 2012 10:13 AM

Anonymous said...
Joe, We were hanging out at Lagoon last night and overheard a extremely loud a conversation from VERY credible sources that the reason the FBI was involved is because you have claimed in the past that you are MSM and as such are subject to the Freedom of Information Act. They are going after your computer records Monday.
June 24, 2012 10:18 AM

Anonymous said...
She should be blaming the people that dragged her down to their level. The mayor, her co-workers/editors at the paper etc. Instead she wants to blame you.

You didn't get her fired, her room mate, her actions and the actions of the editor got her canned.

She obviously has a serious drinking problem and should seek help before she gets a DUI or something even more serious.

She was used as the sacrificial lamb, that's her problem. Her tenure at the paper proves her value as an employee, a friend of Jim Ireton, was not healthy anyway.