On a pleasant afternoon while out Christmas shopping with her Mom (Barrie Tilghman), Catherine was stalked and photographed by Albero in Kuhn's Jewelers. Albero posted the pictures. He made disparaging comments about her mother and her mother. Joe went over the top by hinting that Catherine was pregnant and didn't know who the father was. Then Joe (his multiple personalities) and his minions posted numerous lies and insulting, hateful comments about the pretty young college student. Just Wrong!
Posted by TomCat at 3:21 PM No comments: 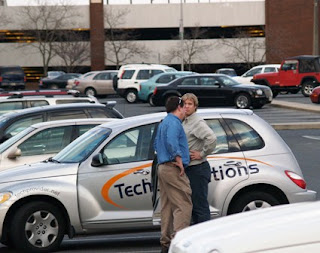 There is a RUMOR on the street that allegedly Doug Church and Brad Gillis were in an accident this morning, (could have been last night) where the flipped Brad's brand new BMW on Pemberton Drive.
Comments:

June 19, 2009 When Urban Salisbury was having their final meeting, thinking they were no longer going to be around, "I" brought up the Disney Concept. I don't know where Brad Gillis became recognized for such, (he was in the same meeting) but I explained to everyone just how Disney created Disney Land and Disney World.

Posted by TomCat at 3:49 AM No comments:

Joe has made numerous negative posts about this successful business. I've never had anything but the best of experience with this restuarant.
Posted by TomCat at 8:33 PM No comments:

Incorrectly identified Ariel Services in Parsonsburg as the owner of the crane in an accident at the Waste Water Treatment Plant. Later, Albero correctly reported that it was Pizzagolli crane operated by an employee of that company. Good thing he posted Jeff's phone number so people could tell him what Joe was posting and set him straight. Though Joe did correct the story, he never mentioned the previous error or offered an apology.
Posted by TomCat at 8:37 PM No comments: