As we all know, Joe has really, hurt their business. HAHAHAHAHAHA! That joke of a human being Joe Albero was kicked out of the Dover Downs event this year. Remember how he said he was a "professional pool player"? Well, playing in a casual league doesn't make you a pro- sorry!He made a bad impression on them last year, and from what I've heard, quite a few drivers refused to come back this year if he was involved. Did he get free tickets or anything? No! LOL!

The Truth Behind NASCAR And Dover Downs 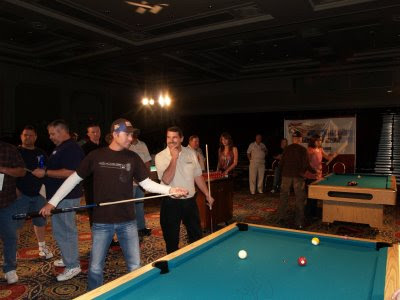 As many of you know, last year I was asked to participate in a new idea Executives at Dover Downs felt would be a great idea. Instead of their typical Cooking Show where Drivers took the time to cook up special meals with Chef Fred, they read a Post here on Salisbury News learning that I used to be a Professional Pool Player and thought perhaps they could pull off an event at Dover Downs.

I received a telephone call asking me what it would take to do so and if I'd be interested in putting the event together as a Host. They wanted to know what I would charge them to do so and after hearing their excitement about the idea I said, I'll tell you what. If you really want to pull off this event, I'll take the same risks as you and I won't charge you anything THIS YEAR. Should the event be a success you can start paying me next year. We agreed.

I told them to sit back for an hour or two and I'd see what I could do. I then called my good friend Bruce Hunter, (Bruce's Billiards) from Salisbury and I filled him in on the situation. I told them what Dover Downs was willing to put up money wise to RENT the Pool Tables for a day and it was almost as much as what he could sell the Pool Tables for. The major problem was, how were we going to pull this off in two days. Bruce rearranged his entire schedule, worked with Dover Downs and even agreed to Referee for the event.

Here's where things got interesting. While Bruce and I both never thought we'd see a sell out crowd at this event, we arrived the day of the event with a crowd standing in line like I had never seen before. We met with several other people Dover Downs had brought into the picture as referee's and we held a pre meeting where a new guy, (another executive) started the meeting by telling ALL of us we were going to be referee's. I stood there kind of dumbfounded and said, excuse me but that's NOT what I had been brought in for. He said, "Well Things Change, Do You Have A Problem With That." I turned to him and I said, do you know who put this entire event together? He replied, you did. I then said, do you know how much money you paid me to pull this entire event off? He said, I don't believe we did pay you. I said, that's exactly right. Now I didn't do all this work and travel all this way just to be told like a puppet that I was going to be one of your referee's. I was brought in to commentate and Host this event, not referee. Again, he said, well things change, do you have a problem with that.

I looked at him, walked over to my suit, grabbed my Pool Cue and said, nope, I have no problem with it at all. Good luck with the event. I then walked out of the building, leaving Bruce Hunter behind. I got the Valet People to go get my car where my cigars were and just as they pulled up with the car Bruce came out and said, what are you going to do. I told him I wouldn't leave him high and dry, (as I drove him to the event) but I'd have nothing to do with these a-holes. He said, so you're just going to leave? I said, no, I expect my phone to ring any minute now because there's no way they're going to pull off this event without me, just think of the Post I'll have up on the Blog about it.

Within 2 minutes George, (one of the executives) was calling me on my cell and he said, Joe, we need a referee. Can you help us out during the beginning of the event and then we'll have you commentate the event for the Finals? I said, sure, that works for me. Bruce was smiling and laughing like there's no tomorrow because he knew I wasn't going to take any sh!t from these people.

If you've never seen the final event, here's my Post on it and the VIDEO of the actual event.

All that being said, this weekend Dover Downs pulled off this event once again, this time sponsored by Brunswick and Hosted by Ewa Mataya Lawrence, a very dear and old friend of mine. Did I get a call from Dover Downs asking to be a part of the event? NO. Did Bruce Hunter get a call from them asking for Pool Tables, NOPE! They used us last year and while they said they did not expect much of a crowd the first year, the place was sold out, they offered absolutely nothing.

So for those of you who have any ties whatsoever with Dover Downs, they're users and do NOT come through with commitments or agreements. A lot of time and effort went into pulling this event off and while I support it for the good of the sport, I do not appreciate the fact that Bruce Hunter called this year to see if they could provide us with guest seats for the Billiard Event or even tickets to the races, they refused to offer anything.

Over my many years of being around Pool, this is somewhat common. However, our agreement and understanding was that I would take the same risk because I felt bad that they may not have much of a crowd and I wanted to GIVE BACK to a sport I love so much.

Dover Downs, YOU'VE JUST BEEN BLOGGED!
Posted by TomCat at 1:58 AM No comments:

The BP Gas Station 7 miles south of Dagsboro is right now selling gas for .268 cents per gallon! Get it while supplies last!!!!! See You There! It's right on Rt. 113 and it's a completely self service gas station. The Motor Coach is now FULL and this is Super Unleaded Gasoline!
Posted by TomCat at 4:17 PM No comments:

May 22, 2009--Joe decided to trash Tommy Hosier. Albero accuses Tommy of being TomCat of Class Act. Again Joe doesn't have a clue. Tommy is a big dude and been in a fight or many. He's a mechanic. Hey Albero, I hear he'd like to jack you up and do a little wrenching on your short self.
Posted by TomCat at 2:26 PM No comments:

Accused of being one of Jonathan Taylor’s contacts (Is that illegal?)—Joe makes the following threat: “The walls keep crumbling down Ladies & Gentlemen. If you're on the list above, well, you know what's coming! I wonder who each one of these people work for. Find out next week.”
Posted by TomCat at 1:54 AM No comments:

Accused of being one of Jonathan Taylor’s contacts (Is that illegal?)—Joe makes the following threat: “The walls keep crumbling down Ladies & Gentlemen. If you're on the list above, well, you know what's coming! I wonder who each one of these people work for. Find out next week.”
Posted by TomCat at 1:49 AM No comments:

Accused of being one of Jonathan Taylor's contacts. Joe sends the following threat. "The walls keep crumbling down Ladies & Gentlemen. If you're on the list above, well, you know what's coming! I wonder who each one of these people work for. Find out next week."
Posted by TomCat at 1:38 AM No comments:

Made the mistake of advertising on sbynews.com and trying to collect a debt from Beau Oglesby.
Posted by TomCat at 2:40 PM No comments: