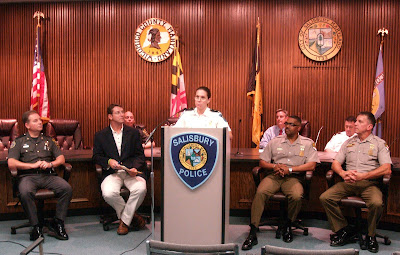 We mentioned the other day that several Salisbury Police Officers have left the Department. Well, it gets worse. The latest Intel is that 12 more Officers are aggressively looking for jobs elsewhere. Morale is at an all time low. We're told many Officer do not like the Chief and that the Chief has no loyalty towards her Officers.

We have a problem here Ladies & Gentlemen. One, the citizens are at risk. There are NOT enough Officers in the Academy to fill these positions and more importantly we have a Mayor in Office who is keeping this all under wraps.

You know darned well Mayor Ireton clearly has the ear of the Press, yet NOTHING has been mentioned about this situation. Why, because the Mayor is a School Teacher, (with all due respect) and NOT a businessman. He continues to prove day after day he cannot manage this City and now it is at the risk of our safety.

While I want to show as much confidence in Chief Duncan, each one of you know I have a personal issues with everyone involved in the recent alleged phone spoof in which they filed criminal charges against me for filing a false police report, all of which I never made a report, never called the police, Councilwoman Campbell called the police but they used these false charges against me to gain access to my phone records. Records in which I value to the highest level of privacy in the news business and will always refuse to allow access to anyone.

Anonymous said...
She comes down on the officers to keep the heat off her. When it gets bad enough, she will turn tail and run, just like she did in mt Vernon
July 12, 2012 9:39 PM

Google "chief barbara duncan" and see what you come up with, Looks like she destroyed mt vernon police dept, left in the middle of a mess before it came down on her, only to destroy salisbury's dept.
July 12, 2012 8:41 PM
Posted by JoesVictims at 11:28 AM 1 comment: